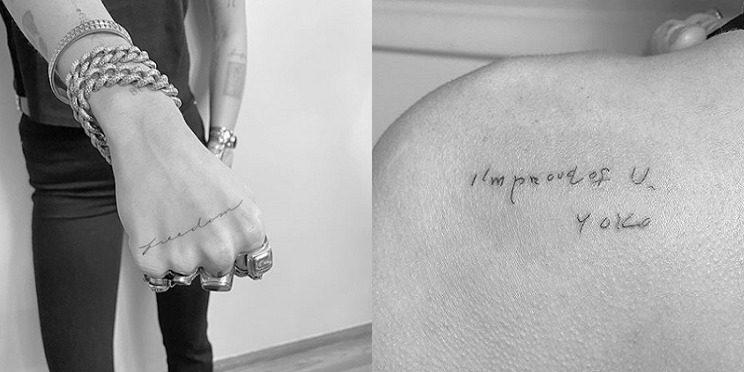 Miley Cyrus got some new work over the weekend from celebrity artist Daniel Winter aka Winter Stone (@winterstone). She ended up getting 2 new tattoos, both were script and one was on her hand while the other on her back shoulder blade. The tattoo on her hand is the one people are talking about. It’s just the word Freedom written in cursive. Winter uses the #singleneedle in his post showing the piece so we can assume it was done with a single needle. It is likely in reference to her divorce from Liam Hemsworth. She has been putting out a ton of new music about the break up so the tattoo makes sense. What are your feeling on break up tattoos? Would you ever get one?

The other tattoo that is on her back shoulder blade is apparently a note that Cyrus received from Yoko Ono. The tattoo says “I’m proud of U – Yoko Ono”. Did anyone have any idea that Yoko and Miley were friends? Talk about an odd couple, but in the world of famous people it’s better to not try and make sense of it. I guess Miley considers them good enough friends to get her not tattooed on her. Would you ever get a quote that a friend or family member gave to you tattooed on you?

Want to see more celebrity check out Jusin Beiber’s new tattoos? Stay on top of the latest tattoo news make by following us on FaceBook @TattooLoversShop and IG @TattooLoversShop
Want to get some dope holiday gifts for the tattoo lovers in your life? Check out our store Tattoo Lovers Shop