There are funny tattoo and then there is everyone thinks it’s funny but your wife tattoo. James McGraw got a tattoo of a selfie he took with his wife while she was sleeping on a plane. His wife, Kelly, had her head back and mouth open as many people do when they fall asleep on a plane. Needless to say it’s not the most flattering pic. Taking the pic is one thing, getting the pic largely tattooed on your leg is taking it to a whole new level. James thought it was hilarious but his wife did not! The Sun caught up with Kelly for an interview and she said “she was horrified” and “he crossed the line”. He even added extra chins to the tattoo which is just plain dirty fighting. Don’t worry though the couple has been pulling pranks on each other for the last 24 years so this one doesn’t seem like it will each the marriage. She said “I just can’t look at it properly without laughing.” She said she is thinking of something to get him back that will top this but that is going to be difficult. What would you do if your significant other got a large unflattering pic of you?

We are including this pic because Kelly deserves a much more flattering pic where she is awake to show off for being such a good sport. As you can see James is no stranger to ink. Hopefully he doesn’t come to regret his latest tattoo.

Can you imagine what the artist thought when he brought in this pic and said this is what I want. There had to be a few “are you sure about that” and laughs. 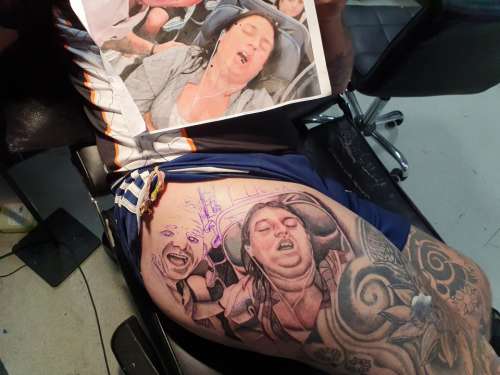